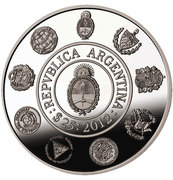 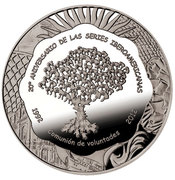 20th Anniversary of the Ibero-American Series

Design common to all the currencies that integrate these series, the central Argentine National Coat of Arms and inscriptions "REPVBLICA ARGENTINA", the face value "$ 25" and the year of coinage "2012" are distinguished in a central position. Surrounding our emblem, the shields of all participating countries.

The central motif of the design stands on two fundamental pillars, the linguistic one with the phrase Communion of Wills that expresses the synergy between the countries, and the image.
This manifests the participatory spirit through the primitive iconography of man, imprint of his hands as a universal language arranged to compose a whole, the allegory of the tree, which represents the origin, development, growth and fruits of this numismatic program. It is surrounded by the text "20° ANIVERSARIO DE LAS SERIES IBEROAMERICANAS" in the upper arch and "1992 COMUNIÓN DE VOLUNTADES 2012" in the lower. On the outer rim is a bias of the motifs of the eight series issued, evoking the uninterrupted presence of our country in the trajectory of the Iberoamerican series.

The IX Ibero-American Series of Commemorative Coins, whose motto is "20th Anniversary", is the result of a collective project that has twenty years of successful track record and our country has always participated. This time also involved: Cuba, Spain, Guatemala, Mexico, Nicaragua, Paraguay, Peru and Portugal.

The design of this numismatic piece was realized in the Management of Strategic Planning of Treasure - Submission of Numismatic Emissions - of the BCRA.

Members from this site want to exchange it: aminos, maurilp04

Bullion value: 20.84 USD Search tips
This value is given for information purpose only. It is based on a price of silver at 835 USD/kg. Numista does not buy or sell coins or metal.