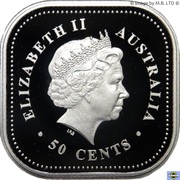 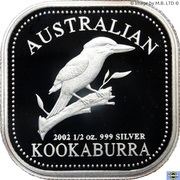 Perth Mint's 2002 Proof issue of the Australian Kookaburra Silver Bullion Coin Series is Australia's first ever square-shaped legal tender coin.  The design is based on the early square Kookaburra pattern pennies of which none were ever officially circulated.

The coin was released in a lenticular coincard.

Members from this site want to exchange it: NicosP, Andrej-Oslo

Bullion value: 13.25 USD Search tips
This value is given for information purpose only. It is based on a price of silver at 852 USD/kg. Numista does not buy or sell coins or metal.