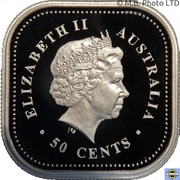 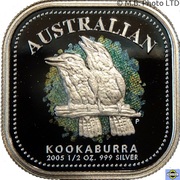 This is the fourth legal tender square shaped coin to be issued in Australia by the Perth Mint.  Design is based on the early square Kookaburra pattern pennies of which none were ever officially circulated. The coin was released in a small black case inside a coloured shipper with numbered certificate. 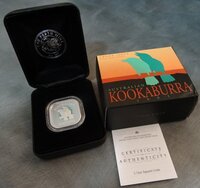 Bullion value: 14.01 USD Search tips
This value is given for information purpose only. It is based on a price of silver at 901 USD/kg. Numista does not buy or sell coins or metal.