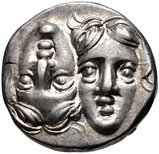 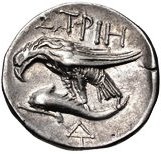 Istros, Thrace
Histria (Sinoe) or Istros, an ancient Greek colony on the western shore of the Black Sea (near the modern village of Istria, Romania), was probably the first Greek colony and was founded in 657 - 656 B.C. or sometime between 630 and 620 B.C. by Milesian settlers in a strategic position near the Danube Delta. The ancient Greek name for the lower section of the Danube, Europe's second longest river. In Greek mythology, one of the Potamoi (river gods), descended from the Titans Oceanus and Tethys, associated with the Istros River (modern Danube).
The first monetary emissions consisted of cast arrow-heads, later marked with a wheel or inscribed ΙΣΤ. Proper coins were minted from the 5th century: attic standard didrachms with an incuse square reverse and cast small bronzes marked with a wheel. Later the staters suffered several weight reductions, and the incuse technique was discontinued. In parallel, Istros minted silver fractions, and after the silver issues were halted in the Lysimachos era, the city struck gold staters. Later, the city issued autonomous bronze coinage and Roman Provincial coinage.

» Buy coins from the Istros