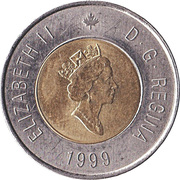 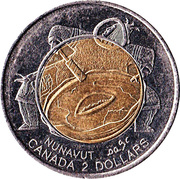 Creation of the territory of Nunavut on April 1, 1999

The portrait in right profile of Elizabeth II, when she was 64 years old, is surrounded with the inscription "ELIZABETH II D • G • REGINA" (Elizabeth II, Queen by the grace of God)

A reproduction of a silk screen print which represents an Inuit drummer is surrounded with the legend "NUNAVUT" both in the Latin alphabet and the Inuktitut syllabary, the inscription "CANADA" and the face value