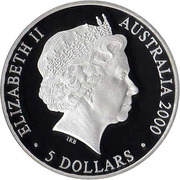 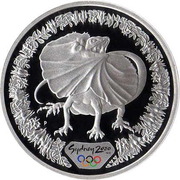 The Royal Australian Mint and the Perth Mint shared production of the sixteen coins in this Sydney Olympic 16 coin Fine Silver Set of coins. Each reverse is surrounded by a rich border of Australian flora.

Bullion value: 26.25 USD Search tips
This value is given for information purpose only. It is based on a price of silver at 831 USD/kg. Numista does not buy or sell coins or metal.