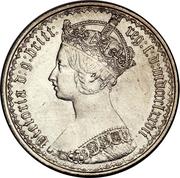 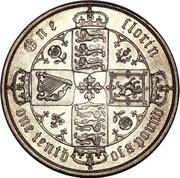 Crowned bust of Queen Victoria left, legend and date around.

Translation: Victoria by the Grace of God Queen of the Britains Defender of the Faith 1877

William Wyon RA, was official chief engraver at the Royal Mint from 1828 until his death.

Lettering:
One florin
one tenth of a pound

Bullion value: 7.85 USD Search tips
This value is given for information purpose only. It is based on a price of silver at 750 USD/kg. Numista does not buy or sell coins or metal.