1 Peso 50th Anniversary of the UN 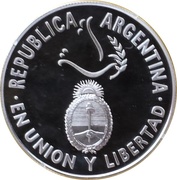 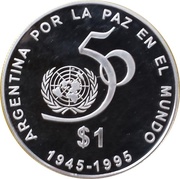 50th Anniversary of the UN

The Argentine National Coat of Arms is seen, on which a dove, a universal symbol of peace, flies.

It shows the emblem of the 50th Anniversary of the O.N.U. And the legend "ARGENTINA FOR PEACE IN THE WORLD", surrounding it.

Although the Argentine Republic was part of both collections, the commercialization in the country was made exclusively around the national pieces. The desire of our country to achieve a world in peace, is reflected in the design made by the plastic artist Carlos P. Rodríguez Dufour, which shows the Argentine National Coat of Arms, on which a dove, a universal symbol of peace, flies.

Bullion value: 20.22 USD Search tips
This value is given for information purpose only. It is based on a price of silver at 899 USD/kg. Numista does not buy or sell coins or metal.