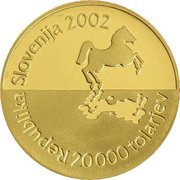 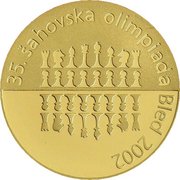 On occasion of the 35th Chess olympiad Bled

Chess is a game for two players each of whom moves his 16 pieces according to fixed rules across a checkerboard and tries to checkmate his opponent´s king. Given the common expressions used for individual moves and combinations in any language, chess can be considered constructor of bridges between races, nations and people of different beliefs.
There are no reliable sources on the origins of the so-called "royal game", however, its cradle is presumably somewhere in Asia, most probably in what is today Iran or India. The oldest written records on chess date from the late 6th century Persia. Merchants brought the game to Europe at the turn of the first millennium. In the Middle Ages and especially at the beginning of the Modern Age chess became a popular game. Problem chess established itself in Europe long before chess tournaments did. This was also the case in Slovenia: ever since 1856 Slovenians were also awarded the highest prizes. At the turn of the 19th century Milan Vidmar was one of the world´s top chess players. The 20th century registered several Slovenian grand masters, like Vasja Pirc, Bruno Parma, Albin Planinec, Stojan Puc and others. Chess has been popular among the youth and there are many potential future masters among the participants in the youth chess tournaments.
The Slovenian chess gained its highest recognition on the occasion of the congress of FIDE, the international chess organisation, in 1998 when Slovenia was entrusted with the organisation of the 35th Chess Olympiad Bled, Slovenia 2002, with the greatest chess masters from all over the world participating.
To mark this event, which countries get to host perhaps only once in a lifetime of their average citizen, the Republic of Slovenia is issuing two commemorative coins. The front of the coins features the 32 chess pieces in starting position of the game and on the back there is the official logotype of the Olympiad – an image of a reared up horse with its reflection in the water (the lake of Bled).
Accessed at: https://www.bsi.si/en/banknotes-and-coins/slovenian-tolar/commemorative-editions-republic-of-slovenia/on-occasion-of-the-35th-chess-olympiad-bled-slovenia-2002

Bullion value: 370.75 USD Search tips
This value is given for information purpose only. It is based on a price of gold at 58 850 USD/kg. Numista does not buy or sell coins or metal.