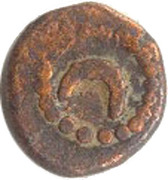 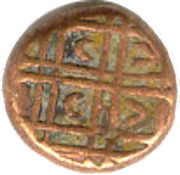 King Chikka Devaraja Wodeyar issued One hand-struck Kasu coin each year of his reign (1673-1704) indicating the completion of one year of his rule. Thus the Kannada numeral 1 was struck on the coin in the year 1674. Similarly in 1675 he issued a coin with the numeral 2 (in Kannada) indicating that he completed the second year of his rule in the Indian state of Mysore.
In total he struck 31 coins (1704 A.D. being his last year of reign). Each coin/year, had an unique Kannada numerals on it, starting from 1 & ending with 31.
Two coins 32 & 33 was issued after the king's death by his queen consort (regent) in the year 1705 & 1706 which are very rare.

Lettering: ೧ (1) within a circle of beads

Members from this site want to exchange it: chethan2202, NaveenkumarJ, vidya, elwin.kaunds

» Buy coins from the Kingdom of Mysore at eBay