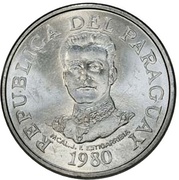 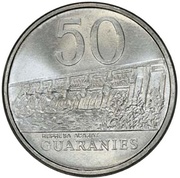 Name of the country, bust of Marshal José Félix Estigarribia facing and year of issue below

Value above, dam on the Acaray River

Marshal José Félix Estigarribia Insaurralde (February 21, 1888 – September 7, 1940) was a decorated Paraguayan war hero and an elected President of Paraguay for the Liberal party, who following his election, repositioned himself to become dictator. He died in a presumed accidental airplane crash barely a year after his election.

The Acaray Dam is a hydroelectric dam situated in Hernandarias, Paraguay. It has an electrical output of 210 megawatts (280,000 hp), supplying 3% of Paraguay's electricity demand.