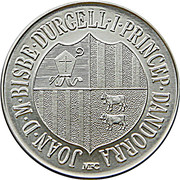 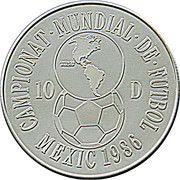 Arms on shield within legend

Translation: Joan D.M. Bishop of Urgell and Prince of Andorra

The 1986 FIFA World Cup, the 13th FIFA World Cup, was held in Mexico from 31 May to 29 June 1986. The tournament was the second to feature a 24-team format. With European nations not allowed to host after the previous World Cup in Spain, Colombia had been originally chosen to host the competition by FIFA but, largely due to economic reasons, was not able to do so and officially resigned in 1982. Mexico was selected as the new host in May 1983, thus becoming the first country to host the World Cup more than once.

Members from this site want to exchange it: spuogas, frojask

Bullion value: 5.93 USD Search tips
This value is given for information purpose only. It is based on a price of silver at 823 USD/kg. Numista does not buy or sell coins or metal.