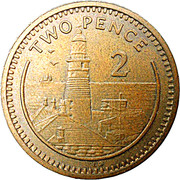 The mintmark is at the bottom above the border