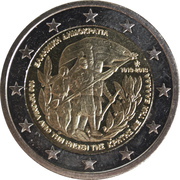 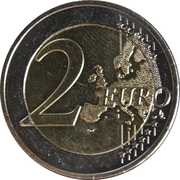 100th Anniversary of the Union of Crete and Greece

The inner part of the coin depicts Cretan rebels raising the Greek flag, a symbolic representation of Crete’s struggle for Union with Greece. On the upper side, in circular sense and with capital letters the name of the issuing country ‘Hellenic Republic’ in Greek. Underneath the words: ‘100 years of the union of Crete with Greece’ in Greek. On the right: ‘1913-2013’ and the monogram of the Greek Mint. The coin’s outer ring bears the 12 stars of the European Union.

Translation:
HELLENIC REPUBLIC
1913-2013
100 YEARS FROM THE UNION OF CRETE WITH GREECE

The history and fate of the ‘Great Island’ of Crete were always inextricably connected with those of mainland
Greece. Strategically situated between Europe, Asia and Africa, Crete fell to a series of conquerors, from the
Romans and the Saracens to the Venetians and the Ottomans. Union with the modern Greek state was hard
won by the Cretans after several violent uprisings, including the Cretan Revolt of 1866 marked by the selfsacrifice of hundreds of besieged at the Arkadi Monastery. After the revolt of 1897-98, the island was
declared an autonomous ‘Cretan State’, with Prince George of Greece appointed its High Commissioner. Crete was formally integrated into Greece under the Treaty of London in 1913, after the Balkan Wars of 1912-13.
The coin was issued in bankrolls, in Proof quality along with the proof year set and in BU quality on a coincard blister.