Australian Coat of Arms consisting of a shield depicting the emblems of the six Australian States. Aside the shield are a Red Kangaroo and Emu. Above the shield is a seven pointed star on a wreath, each point representing the 6 States and one for the Territories. Below are sprays of Golden Wattle and 'Australia' in a scroll.

Released into circulation by the Royal Australian Mint is this 50 cent coin which depicts the Coat of Arms of the Federated States of Australia as a whole. The Capital of Australia is Canberra.

This coin is the most common of the series of Federation 50 cent coins. It was also issued in the UNC Year Mint Set ... 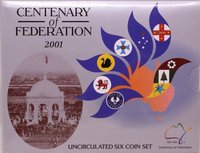 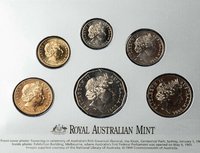 And the UNC Koala Baby Set ... 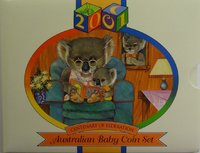 Nine of the Federation State 50 cent coins depicted the coat of arms of each state and territory of Australia that were joined together in 1901 at Australia's Federation.