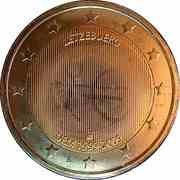 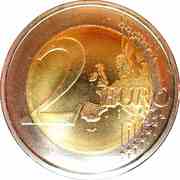 The coin shows a stick figure which merges into the € symbol. It seeks to convey the idea of the single currency and, by extension, Economic and Monetary Union (EMU) being the latest step in Europe’s long history of trade and economic integration. The coin is issued by each euro area country and shows the name of the country as well as the legend ‘EMU 1999-2009’ in the respective language(s). The coin’s outer ring bears the 12 stars of the European Union.
A large latent image showing either the main design, a stylized man with the Euro sign (€), or the portrait of Grand Duke Henri I