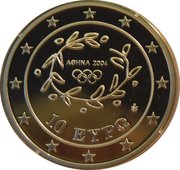 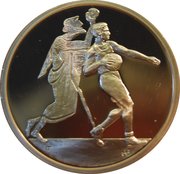 The design consist of the emblem of the ATHENS 2004 Summer Olympics, a wreath made from an olive tree branch, or kotinos, a reference to the ancient Olympic Games, where the kotinos was the official award of Olympic champions. The wreath around Olympic rings are enclosed in a circle surrounded by 12 stars.

The 2004 Summer Olympics, officially known as the Games of the XXVIII Olympiad and commonly known as Athens 2004, was a premier international multi-sport event held in Athens, Greece, from 13 to 29 August 2004 with the motto Welcome Home. The Games saw 10,625 athletes compete, accompanied by 5,501 team officials from 201 countries. There were 301 medal events in 28 different sports. Athens 2004 marked the first time since the 1996 Summer Olympics that all countries with a National Olympic Committee were in attendance. 2004 also marked the return of the Olympic Games to the city where they began. Having previously hosted the Olympics in 1896, Athens became one of only four cities to have hosted the Summer Olympic Games on two separate occasions at the time (together with Paris, London and Los Angeles). The 2004 Olympics were generally deemed to be a success, with the rising standard of competition amongst nations across the world. The final medal tally was led by the United States, followed by China and Russia with the host Greece at 15th place. Several World and Olympic records were broken during these Games. 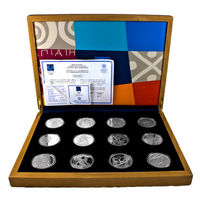 Members from this site want to exchange this coin: Juha, Wolfgang

Bullion value: 18.22 USD Search tips
This value is given for information purpose only. It is based on a price of silver at 579 USD/kg. Numista does not buy or sell coins or metal.