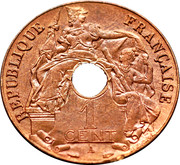 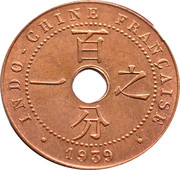 Lettering and denomination around allegorical figures, mintmark below in exergue.

Mintmark is below EN of CENT. A is Paris, thunderbolt is Poissy, no mintmark is San Francisco.

Possibly a mule exists as 1930 with wing mintmark.