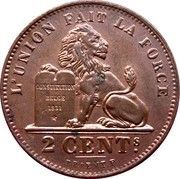 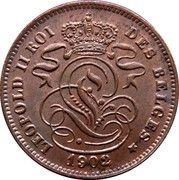 Changes in the position, spacing and size of the date can be observed for most years. The difference between large and small dates made by the SCWC for 1874 and Aernout for 1869 is relative.

The SCWC differentiates for the year 1869 between reeded and smooth edge. No other author makes this distinction. A smooth edge remains unknown to this day and can be considered as an inaccuracy of the SCWC. Smooth or almost smooth edges can be observed on coins in poor condition, but these are due to the degradation of the coin.

The 1870/71 overdate listed by the SCWC is not mentionned by any other author and remains unknown to this day. It can be considered as an SCWC error.

Aernout lists three varieties in the lion's mane for the year 1870. The other authors do not differentiate.

Morin notes that the year 1871 was not officially brought into circulation and probably struck in 1873 with year 1871. 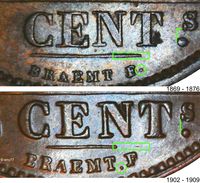 On the obverse we can see that the line under CENT is now shorter and that the dot in the signature is no longer behind the F but behind BRAEMT (sic). From 1902 onwards the word CENT is larger and the S is no longer above the dot.
Other less significant changes can be seen in the legend and on the lion.

On the reverse side the differences are less visible; the monogram and the crown remain the same, but a slight difference can be seen in the spacing of the words "LEOPOLD" and "BELGES".