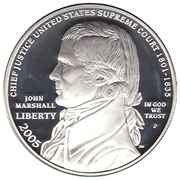 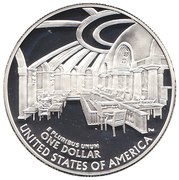 250th anniversary of the birth of Chief Justice John Marshall.

Profile Portrait of Chief Justice John Marshall based on an 1808 painting by Charles-Balthazar-Julien Fevret de Saint-Memin (pictured below).

Interior view of the Old Supreme Court Chamber located in the U.S. Capitol

The 2005 Chief Justice John Marshall Silver Dollar was issued for the 250th anniversary of his birth. He served as the fourth Chief Justice of the United States from 1801 to 1835 and most notably established the doctrine of Judicial Review, asserting that the Supreme Court has the authority to overturn an Act of Congress if it exceeds the powers granted in the Constitution.

The John Marshall Silver Dollar was minted in proof and uncirculated versions, both struck at the Philadelphia Mint. Individual coin sales began on April 25, 2005, with pre-issue prices in effect until June 27. A Chief Justice John Marshall Coin & Chronicles Set was later offered on July 18, priced at $59.95 and limited to 25,000 units. This set included the uncirculated version of the silver dollar, an intaglio print of a statue of the Chief Justice, and an information booklet. 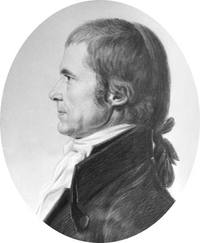 A member of this site wants to exchange it: geostring

Bullion value: 21.50 USD Search tips
This value is given for information purpose only. It is based on a price of silver at 894 USD/kg. Numista does not buy or sell coins or metal.