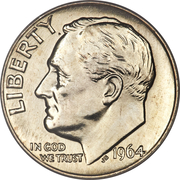 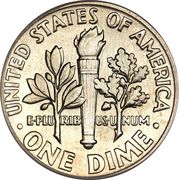 The portrait in left profile of Franklin D. Roosevelt, the 32nd President of the United States from 1933 to his death in 1945, is accompanied with the motto: "IN GOD WE TRUST" and surrounded with the lettering "LIBERTY". Engraver's initials under truncation.

Ahead the motto "E • PLU RIB US • U NUM", an olive branch, a torch and an oak branch symbolize respectively peace, liberty and victory and are surrounded with the face value and the lettering "UNITED STATES OF AMERICA".

If there is a mintmark (D or S) it is to the lower left of the torch (below B of PLURIBUS and above E of ONE).

Lettering:
UNITED STATES OF AMERICA
E • PLU RIB US • U NUM
• ONE DIME •

Translation:
UNITED STATES OF AMERICA
OUT • OF MANY • ONE
• ONE DIME • 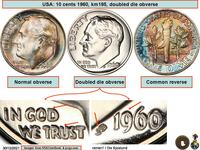 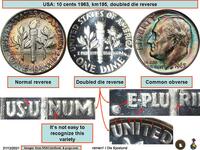 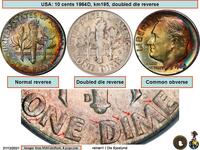 These coins circulated alongside the 25 Centavo piece in El Salvador, as they were worth the same at the time.