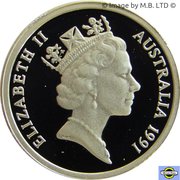 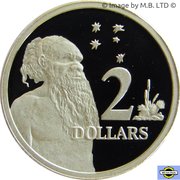 1/2 length figure of Aboriginal man at left, Southern Cross above, denomination at right, Grass Tree to the far right

Released by the RAM in 1988 is this $2 Dollar Sterling Silver (.925) Proof coin. It was available initially individually in a capsule in a small plush black box. The 1988 coin had the "HH" Designers initials on the reverse.

It was also released in the 1988 Masterpieces in Silver Bi-Centennial Set Four coin set along with a Silver $5, $1 & 50 cent coin. This set commemorated the Bi-Centennial year of Australia's settlement by Commodore Arthur Phillip who led the First Fleet to Sydney Cove on 26th January 1788.

Later it was released as part of the 1991 "Masterpieces in Silver" eight coin set (Without the "HH" designers initials) which commemorated the 25th anniversary of the introduction of Decimal Currency. This was the first complete set of Australian circulating coins released in sterling silver and the first sterling silver releases of Australian one, two, five, ten and twenty cent coins. 1991 was also the last year of one and two cent circulating coin production in Australia.

A member of this site wants to exchange it: Kaleb

Bullion value: 7.09 USD Search tips
This value is given for information purpose only. It is based on a price of silver at 910 USD/kg. Numista does not buy or sell coins or metal.