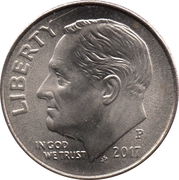 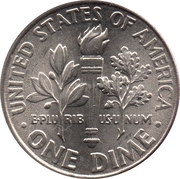 The portrait of Franklin D. Roosevelt facing left, the 32nd President of the United States from 1933 to his death in 1945, accompanied by the motto: "IN GOD WE TRUST" and surrounded with the lettering "LIBERTY".

Ahead of the motto "E • PLU RIB US • U NUM", an olive branch, a torch, and an oak branch symbolize respectively peace, liberty, and victory and are surrounded with the face value and the lettering "UNITED STATES OF AMERICA"

Lettering:
E • PLU RIB US • U NUM
UNITED STATES OF AMERICA
• ONE DIME •

Translation:
Out of Many, One
United States of America
One Dime

The standard weight of this coin is 35 grains.

This design was adopted for the American Dime in 1946, one year after Franklin D. Roosevelt's death. It was minted in 90% silver from 1946 to 1964, until the United States removed silver from nearly all circulation coins starting in 1965. Since 1965, the design has remained relatively unchanged, meaning that the Roosevelt Dime is currently the oldest coin with consistent design, weight, and composition in current American production.