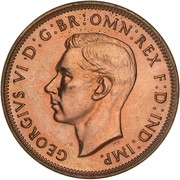 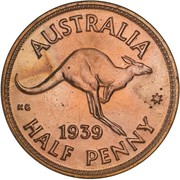 Translation:
George VI by the Grace of God, King of all the British territories, Defender of the Faith, Emperor of India
HP

Kangaroo leaping to right, with the date above the denomination below and the country name above

Demonetized: No - withdrawn at decimalisation in 1966, but have never been formally demonetised and are still legal tender.