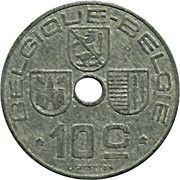 Monogram of Léopold III, date below

The material used is actually a zinc-alloy, a spelter. The term in Dutch is 'handelszink', literally translated as 'trade zinc'.

This coin was made during the German occupation during World War II.