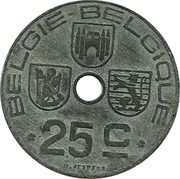 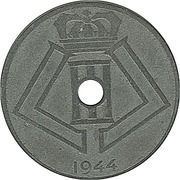 Coats of arms of Brussels (left), Mons (middle) and Bruges (right) surrounded by bilingual legends. Value and designer below.

Monogram of Léopold III around center hole, date below.