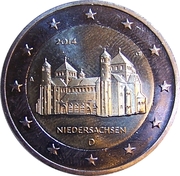 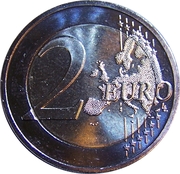 The design shows the Church of St. Michael in Hildesheim, Lower Saxony which has been on the Unesco World Cultural Heritage list since 1985. At the top of the year of issuance ‘2014’ and at the left the mintmark (A, D, F, G, J). At the bottom, the inscription ‘NIEDERSACHSEN’ and underneath the indication of the issuing country ‘D’. At the top right, the initials of the engraver OE (Ott Erich). The coin’s outer ring depicts the 12 stars of the European flag.