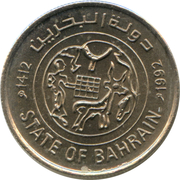 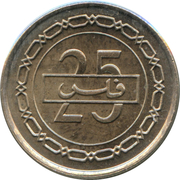 Seal of Dilmun civilization (ancient painting with animal and human within circle). State name in Arabic and English. Islamic and Gregorian dates in English.

» Buy coins from Bahrain at eBay