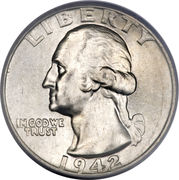 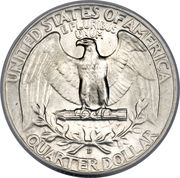 The portrait of George Washington, the first President of the UNITED STATES from 1789 to 1797, facing left, accompanied by the motto: "IN GOD WE TRUST" and surrounded with the lettering: "LIBERTY".

An eagle, wings spread, and standing on a shaft of arrows with two olive sprays beneath the eagle, is surrounded with the face value, the motto "E PLURIBUS UNUM" and the lettering "UNITED STATES OF AMERICA".
NOTE: If there is a mintmark it is at the bottom, above ER in QUARTER.

Translation:
United States of America
Out of Many
One
D
Quarter Dollar 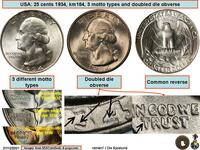 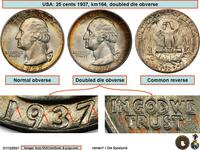 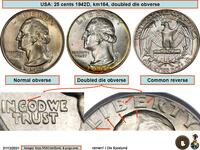 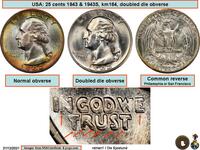 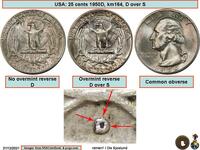 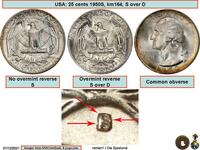 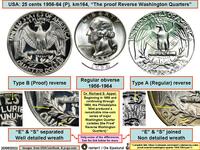 The Philadelphia Mint produced some business strike coins in each of the years 1956 to 1964 using reverse proof dies that had already produced proof coins.  These coins are referred to as Type B Reverses whereas the coins produced with normal (non-proof) dies are referred to as Type A Reverses.  A more complete discussion of these coins can be found in the following Coin Week™ article: