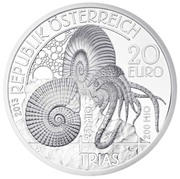 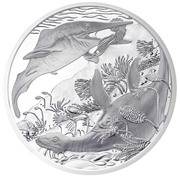 Nothosaurus ("false lizard", from the Ancient Greek nothos (νόθος), "illegitimate", and sauros (σαῦρος), "lizard") is an extinct genus of sauropterygian reptile from the Triassic period, approximately 240-210 million years ago, with fossils being distributed from North Africa and Europe to China.

Bullion value: 14.93 USD Search tips
This value is given for information purpose only. It is based on a price of silver at 830 USD/kg. Numista does not buy or sell coins or metal.