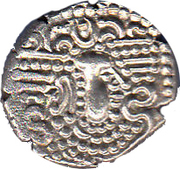 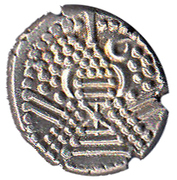 Stylized Head of King Right.
The name of Gadhaiya (Gadhiya) paisa is attributed to the coins of indo-sassanian dynasties and their successors.
The value was equivalent to 1 drachm. Made in Chaulukyas territory from 543 to 753 AD these coins were still produced in the same territory under others dynastys like Gujrat, Malwa, Kandesh, Bahmanis, Salankis, Paramara and Yadavas.

Crude copy of Sassanian Coinage, Also Known as "Gadhiya Paisa". It is believed that the level of abstractism and crudeness is higher in later coins of this type. Also the % of silver content is seen to have been reduced.

Refer to Plat XXV (11-16) in "Catalogue of the Coins in the Indian Museum, Calcutta - Vol. I(c) - Persian Medieval, South Indian and Miscellaneous coins" - by Vincent A Smith (1906)

Pre-history of the state:

The Sassanids, shortly after victory over the Parthians, extended their dominion into Bactria during the reign of Ardashir I around 230 CE, then further to the eastern parts of their empire in western Pakistan during the reign of his son Shapur I (240–270). Thus the Kushans lost their western territory (including Bactria and Gandhara) to the rule of Sassanid nobles named Kushanshahs or "Kings of the Kushans". Kartir, a high-priest that served as advisor to at least three of the early kings, instigated the persecution of non-Zoroastrians, that is, Christians, Buddhists, Jews, Hindus and – in particular – the Manichaeans, who were primarily in and from the eastern territories. The persecution ceased during the reign of Narseh (r. 293–302). Around 325, Shapur II was directly in charge of the southern part of the territory, while in the north the Kushanshahs maintained their rule until the rise of the Kidarites. The decline of the Kushans and their defeat by the Sassanids led to the rise of an indigenous Indian dynasty, the Guptas, in the 4th century. In 410, the Hephthalites or Indo-Hephthalites conquered Bactria and Gandhara, thus temporarily replacing the Indo-Sassanids.

Members from this site want to exchange it: azhardanish, ks37217, maurilp04