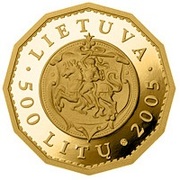 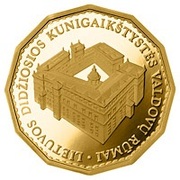 The obverse of the coin bears Vytis, a historical symbol of the Coat of Arms of the 16th century, which is encircled with the inscriptions LIETUVA (Lithuania), 500 LITŲ (500 litas) and 2005.

Bullion value: 1 810.03 USD Search tips
This value is given for information purpose only. It is based on a price of gold at 58 206 USD/kg. Numista does not buy or sell coins or metal.