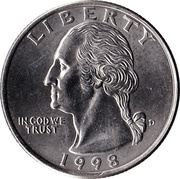 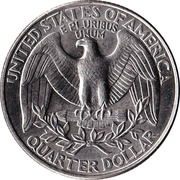 The portrait in left profile of George Washington, the first President of the United States from 1789 to 1797, is accompanied with the motto: "IN GOD WE TRUST" and surrounded with the lettering: "LIBERTY"

An eagle, wings spread, and standing on a shaft of arrows with two olive sprays beneath the eagle, is surrounded with the face value, the motto "E PLURIBUS UNUM" and the lettering "UNITED STATES OF AMERICA"

Translation:
United States of America
Out of Many
One

The standard weight of all quarters issued since 1965 is 87½ grains.
This coin can be found with three mint-marks, which are seen behind Washington's hair: D for Denver, P for Philadelphia, and S for San Francisco. If there is no mint-mark, then it was made at Philadelphia or West Point (see below). 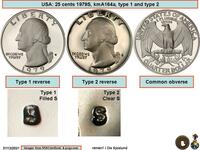 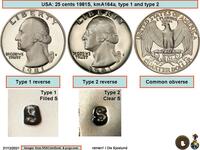