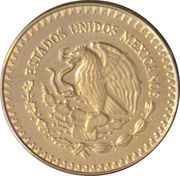 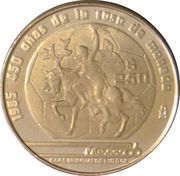 The national seal of Mexico; a Mexican eagle facing left with wings raised and held slightly open, standing on its left claw on a flowering nopal cactus that emerges from a lake and extends to each side, with its right claw and beak hold a curving snake; two branches, one of oak in front of the eagle and the other of laurel on the opposite side, form the lower half of a circle, joined in the middle by a ribbon divided into three bands.

Caballito design (KM#453) of a woman riding a horse carrying a torch and a laurel branch superimposed over a soccer ball with the World Cup Logo beneath.

This value is given for information purpose only. It is based on a price of gold at 57 380 USD/kg. Numista does not buy or sell coins or metal.