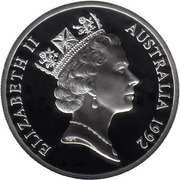 Bust of Queen Mother with tiara right, value below, within wreath of crowns 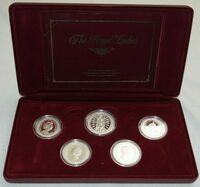 The set was commemorating the 40th Anniversary of the Accession of Queen Elizabeth II.  This particular coin features The Queen Mother .

Bullion value: 28.36 USD Search tips
This value is given for information purpose only. It is based on a price of silver at 912 USD/kg. Numista does not buy or sell coins or metal.