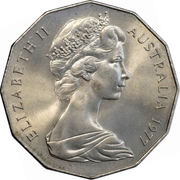 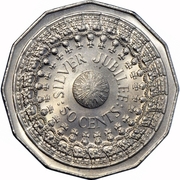 25th Anniversary of the Accession of Elizabeth II

Outer design of 25 overlapping crowns in a circle. Inner starburst with lettering and value surrounding

1977 was the 25th anniversary of Queen Elizabeth II's ascension to the throne (the ‘Silver Jubilee’). This circulating coin was produced by the RAM to celebrate the event.

In 1989 The RAM issued a stunning re-strike of the coin in the "Masterpieces in Silver Set" for that year. However, it had the Raphael Makleouf 3rd Portrait of Queen Elizabeth II on the Obverse.