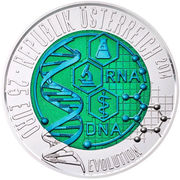 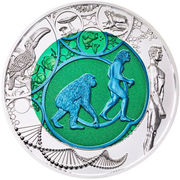 The obverse of the 2014 coin depicts DNA (deoxyribonucleic) as well as RNA (ribonucleic acid) — the keys to evolution. This side of the coin also bears the country of issue republik Österreich (meaning Republic of Austria), the face value and the year of issue, 2014.

The coin’s reverse deals with the history of human development and the diversity of forms of life brought about by evolution. Andexlinger includes a somewhat stylized DNA chain on the reverse.

Three hominid figures also appear in the reverse, recalling the famous graphic “The March of Progress” created by Rudolph Zallinger for F. Clark Howell’s book Early Man, published by Time-Life. The scene is well recognized, copied and parodied the world over.

Members from this site want to exchange it: despot76, Bobdu, tmu