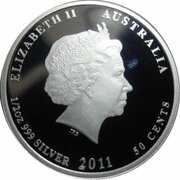 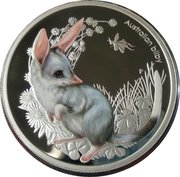 Colourised depiction of an Australian Bilby in typical pose.

Part of the Silver Proof Bush Babies set of ten 1/2 Oz Colourised 50 cent coins released by the Perth Mint between 2010 and 2013.

Bullion value: 12.89 USD Search tips
This value is given for information purpose only. It is based on a price of silver at 830 USD/kg. Numista does not buy or sell coins or metal.