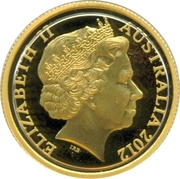 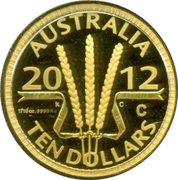 This Fine Gold (.9999) Proof NCLT $10 coin issued by the RAM commemorates the Australian Wheat Industry and replicates the design that adorned the tiny 16mm pre-decimal silver threepence from 1938 to 1964.

It was issued in a capsule in a plush Wooden Case with numbered certificate.

A Fine Silver (.999) Proof version was released in a capsule in a square plush black box with "C" Mintmark

Bullion value: 197.29 USD Search tips
This value is given for information purpose only. It is based on a price of gold at 63,426 USD/kg. Numista does not buy or sell coins or metal.