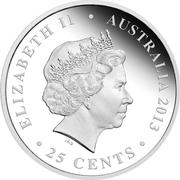 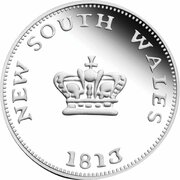 200th Anniversary of the Australian Holey Dollar and Dump

Replica of the original dump

This is the Perth Mint Version of this replica of the Holey Dollar Dump.
The Royal Australian Mint also released a very similar coin (See link)

Bullion value: 4.92 USD Search tips
This value is given for information purpose only. It is based on a price of silver at 829 USD/kg. Numista does not buy or sell coins or metal.