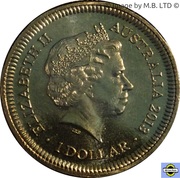 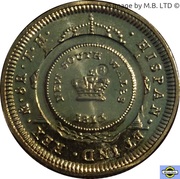 The Royal Australian Mint is commemorating 200 years of Australia’s first official currency in 2013 with a special Holey Dollar and Dump design on an NCLT Aluminium-bronze $1 coin. The coin depicts a Holey Dollar, with a Dump occupying the central space of the coin.

The Holey Dollar and Dump became Australia’s first coins in an innovative effort to rectify a coin shortage and stabilise the economy of the fledging colony. The coins were created from 40,000 silver Spanish eight reale coins, which were imported by Governor Lachlan Macquarie and entered into circulation in 1814.

The coin was released as follows :-

At the Visitor Press on the ground floor of the RAM in Canberra with "C" Mintmark (Mintage unknown). 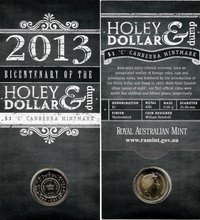 In a PNC by Australia Post with a "C" Mintmark.

The Coin shown above is the (B) Counterstamped version.

The RAM also released a Fine Silver (.999) Proof version of the coin in a plush grey square box.