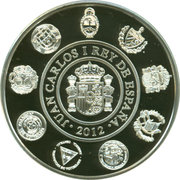 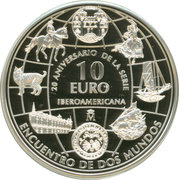 National arms in center of arms of nine other countries

In 1991 fourteen Countries of the Ibero-American world initiated this cultural and numismatic project that is the IBEROAMERICAN SERIES of commemorative coins.
Eight series have been previously broadcast, all under the general motto ENCOUNTER OF TWO WORLDS and dedicated to themes common to our history and our roots.
On this occasion the participating countries have wanted to commemorate the 20th ANNIVERSARY of the collection giving the same title to the IX Series

Bullion value: 18.30 USD Search tips
This value is given for information purpose only. It is based on a price of silver at 733 USD/kg. Numista does not buy or sell coins or metal.