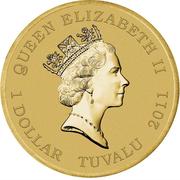 The coin’s reverse depicts Black Bart against the backdrop of a pirate ship and ‘pieces of eight’ coinage. The design includes a representation of Black Bart’s famous diamond crucifix and The Perth Mint’s ‘P’ mintmark