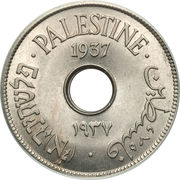 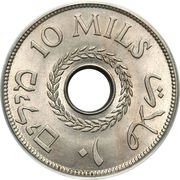 Central hole, encircled by a stylized olive wreath surrounded by Palestine in Hebrew, English and Arabic with date in English above and Arabic below the hole

Value in Hebrew, English and Arabic around a central hole

The 10 mils coin was issued in copper as opposed to copper-nickel in 1942 and 1943 during the Second World War so that the nickel could go towards the war effort. Both the 5 mils and 20 mils coins were also issued as copper coins between the years of 1942 to 1944.

» Buy coins from the British Palestine