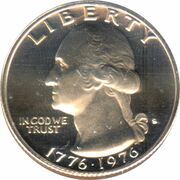 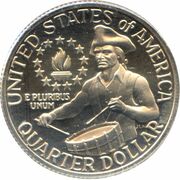 200th Anniversary of the The United States Declaration of Independence, 1776-1976

The portrait in left profile of George Washington, the first President of the UNITED STATES from 1789 to 1797, is accompanied with the motto: "IN GOD WE TRUST" and surrounded with the lettering: "LIBERTY"

Translation:
United States of America
Out of Many
One
JLA
Quarter Dollar

The American Revolution began in 1776, and this coin commemorates the 200th anniversary of the U.S.' independence in 1976 (also known as the American Bicentennial), a widely celebrated event. All quarter dollars, half dollars, and dollars were struck with a special obverse for during 1975 and 1976, and were the first of America's "modern" circulating commemoratives, and are currently also the only circulating commemoratives to not to be part of a long multi-year series, then followed by the state quarters.

Of the coins without a mintmark, 376,000 were minted at the United States Bullion Depository, West Point. These coins are indistinguishable from the Philadelphia issue.