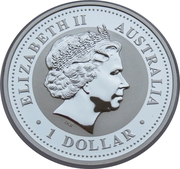 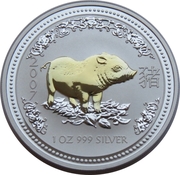 Pig standing in a pile of leaves. The piglet has been gilded in 24-carat gold. The design includes the Chinese character for "pig" and the 200 year-date. These elements appear within a border of bats and clouds symbolising health, peace and prosperity.

Bullion value: 18.04 USD Search tips
This value is given for information purpose only. It is based on a price of silver at 580 USD/kg. Numista does not buy or sell coins or metal.