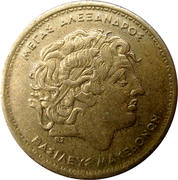 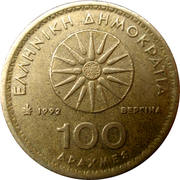 Translation:
Alexander the Great
V.S.
King of the Macedons

A 16-point star, the symbol of Macedonia surrounded with the value and the country name

Alternatingly smooth and reeded (six reeded segments with 11 grooves each) 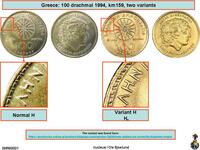 Alexander the Great was born in Pella, Macedonia, present-day Greece in July 356 BC. His parents were King Philip II of Macedonia and Princess Olympiada of Epirus. As a Macedonian, he was aware of his Greek origin. He was one of the most important generals in history, and during the 13 years of his reign (336 - 323 BC) he conquered most of the then-known world to the east (Asia Minor, Persia, Egypt etc.) on the outskirts of India, and without losing in a battle he fought.
The total territory of his empire, at its greatest extent in 323 BC, was estimated at 5,200,000 square kilometres and included tracks from 26 present-day countries (Greece, Albania, Northern Macedonia, Montenegro, Serbia, Bulgaria, Romania, Turkey, Cyprus, Egypt, Afghanistan, Iraq, Iran, Israel, India, Jordan, Kazakhstan, Kuwait, Kyrgyzstan, Lebanon, Uzbekistan, Pakistan, Saudi Arabia, Syria, Tajikistan.
He died in Babylon, in the palace of Nebuchadnezzar II on June 10, 323 BC, at the age of 32 years and 11 months. His influence often ranks him among the world's most influential celebrities of all time, along with Aristotle's teacher.

» Buy coins from Greece at eBay