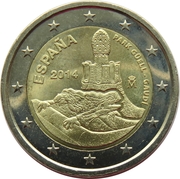 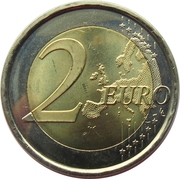 Park Güell and the Works of Antoni Gaudí

The coin depicts in the foreground a lizard sculpture which is the Park Güell emblem and was designed by the architect Antoni Gaudí. As background a detail of one of the pavilions situated at the Park Güell entrance. At the top, in circular sense and in capital letters the words ‘ESPAÑA’ and ‘PARK GÜELL — GAUDÍ’. At the left the year of issuance ‘2014’ and at the right the mintmark. The coin’s outer ring depicts the 12 stars of the European flag.

The architecture of Antoni Gaudí is part of the Modernist style, but his designs are described as highly unique. The original listing featured Park Güell, Palau Güell, and Casa Milà; the 2005 extension added Casa Vicens, the crypt and nativity façade of Sagrada Família, Casa Batlló, and the crypt at Colònia Güell.