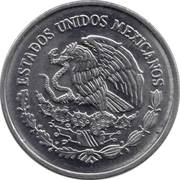 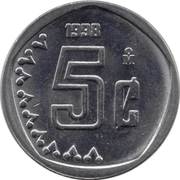 The national emblem of Mexico depicting a Mexican golden eagle perched on a prickly pear cactus devouring a snake above a half-wreath of oak and laurel below and the legend “ESTADOS UNIDOS MEXICANOS” forming the upper semicircle.

On a five-sided field, at center, the denomination 5¢ with the date above the 5 and the mint mark Ṁ above the ¢. To the left and below, a partial border of stylized solar rays of the Quincunces Ring (Anillo de los Quincunces) on the Aztec calendar stone (Piedra del Sol).

Discontinued denomination coin, but still with legal tender. It was discontinued because banks wouldn't request it from Mexico City Mint anymore, as it was nearly useless already.

1999-2002 issues are considerably rarer due to the lowered mintage number because of the aforementioned reason. The 2002 one is considered the rarest of the four dates because it was never sent to banks, so the only way to get one is as part of the 2002 Mint sets. Although there are some loose ones that did circulate, it is nearly impossible finding one of those as no-one uses them anymore, so they don't move from their current holders. 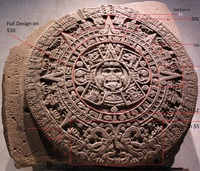