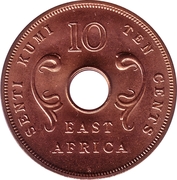 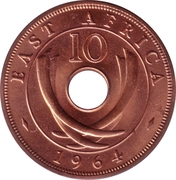 Fleurs flank center hole;
Denomination above and to the right.
Country name below

By 1964 all the three countries of East Africa : Uganda, Tanzania (Tanganyika) & Kenya had not only become independent but also became Republic i.e. The President is the head of state.

This Scenario was also reflected in the coins that were minted in 1964 wherein the British Crown has been removed. All earlier coins i.e. till 1963 had the crown to Symbolise The Queen of England was also the head of state (Commonwealth realm) of these countries.